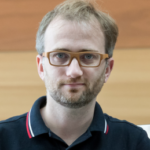 Guillaume did his PhD on the physics of active gels and cell mechanics at the Institut Curie, Paris, in the group of Jean-François Joanny and Jacques Prost. He then went to the University of Michigan for a postdoc with David Lubensky on the regular arrangement of cone cells in the Zebrafish retinal epithelium. He moved to the Max Planck Institute for the Physics of Complex Systems (MPI-PKS) in Dresden where he worked in collaboration with Ewa Paluch, Stephan Grill and Carl-Philip Heisenberg.

In 2011 Guillaume started his group at the MPI-PKS on the physics of the cytoskeleton, working on the physics of active matter and cell and tissue mechanics, in further collaboration with Frank Jülicher, Anne Classen, Suzanne Eaton, Caren Norden and Jérome Solon.

In 2015 he established his lab at the Francis Crick Institute, London, UK. His group at the Crick works on developing quantitative approaches to describe physical processes in biology.

His lab studies how physics applies to biology. They use the law of physics and the approach of theoretical physics to understand the behavior of cells and tissues. Whith that they can then create a mathematical description of biological processes as they happen at the level of the cell or the whole tissue. Theoretical tools and computer programmes are very useful to compare our mathematical description to the reality of biological systems.

The Francis Crick Institute is dedicated to understanding the fundamental biology underlying health and disease. Their work is helping to understand why disease develops and to translate discoveries into new ways to prevent, diagnose and treat illnesses such as cancer, heart disease, stroke, infections and neurodegenerative diseases. An independent organisation, its founding partners are the Medical Research Council (MRC), Cancer Research UK, Wellcome, UCL, Imperial College London and King’s College London.